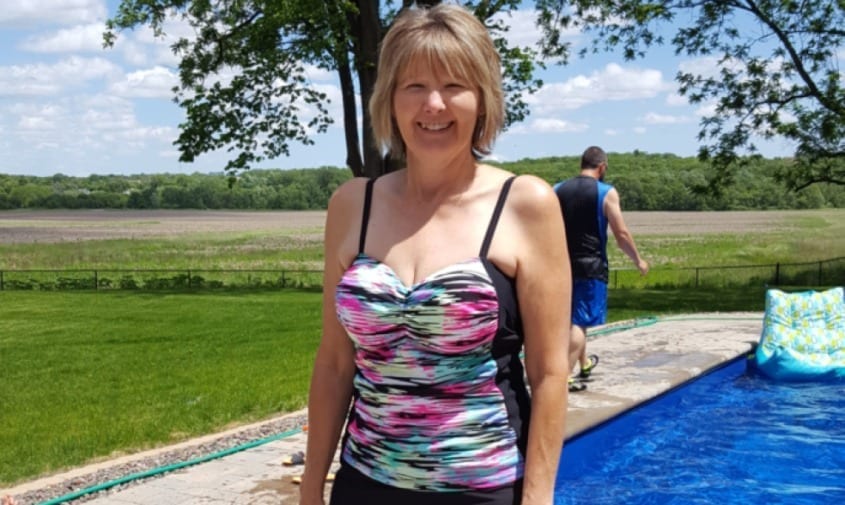 Until this year, Carla Nipps wouldn’t wear shorts or a swimsuit during the summer months because she was embarrassed by her legs.
Varicose veins started showing more prominently in her legs after she had her first child at age 22. Now 57, Carla said the problem worsened during the past three decades, particularly because her job involves a lot of standing.

Doctors initially told Carla that nothing could be done to fix the issue. A dermatologist gave her knee-high support nylons to wear, but a permanent solution still seemed out of reach.

“My legs were so far gone, they would be a challenge for anybody,” she said.

On a whim, she called to make an appointment with Dr. Rimas Gilvydis in the parking lot of that dermatologist office. Carla had low expectations for the consultation: “My legs were disgusting. I looked like I was 100 years old.”

Dr. Gilvydis told Carla she had extensive varicose vein disease in both legs, worse in the right leg, that were treatable with catheter based laser treatments, details she was never told at previous doctor visits.

“She came to us with very prominent varicose veins that have been bothering her for decades,” Dr. Gilvydis said. “We see many people like Carla who are hesitant to come in for treatment because they either don’t know about it, think that insurance doesn’t cover it, or believe that their varicose veins are just cosmetic.”

Carla had five laser procedures done during a week in April 2017 and said, “now her legs are perfect.”

She felt comfortable during her procedures in part because the staff was so friendly and professional. They talked her through the process. Certain areas of her legs were more painful to treat than others, but not so painful that it prevented her from continuing the process.

Her sister accompanied her to the appointments, and they headed to go shopping and the park district path to walk for about three miles after each procedure. Walking helps with circulation, and Carla was diligent about the exercise. She felt a bit of pain after the work was done, but the walking helped.

Dr. Gilvydis stressed the importance of patients following post-laser instructions. He encourages lots of walking, elevating the legs when possible and returning to work, again, if possible. Patients need to wear compression stockings and avoid exercise and lifting more than 40 pounds for two weeks post-procedure. But after the two weeks, there are no more restrictions.

Carla saw immediate results after treatment, to the point where she wishes she would have inquired about the process sooner.

“My legs were so bad for so long. They would swell up at night after work, and there was a lot of pain. But I was so used to it for all those years,” Carla recalled. “Now, I come home from work, and my ankles are skinny – the size they’re supposed to be.”

This summer, Carla bought four pairs of shorts and didn’t shy away from wearing a swimsuit at her family’s pool. She’s even planning to head to the Wisconsin Dells with her family around Thanksgiving, a trip she had avoided because of water park activities.

“I would sweat my butt off wearing pants all the time. This is the first year I wore shorts outside in public,” Carla said. “I was in the pool all summer long, but was still careful in the sun so it didn’t stain my bruises.”

Her kids were also amazed by the improvements. Carla said they always encouraged her to wear shorts but didn’t realize how bad the problems were until she went in for treatment.

Carla still has some bruising in her legs, but that will continue to clear up over time. She was so pleased with the process that she’ll return to see Dr. Gilvydis in October to pay out of pocket to have work done on some spider veins.

“My staff and I love hearing these types of stories from patients,” Dr. Gilvydis said. “It feels great knowing that the work we do affects so many of our patients in such a positive and uplifting way.”